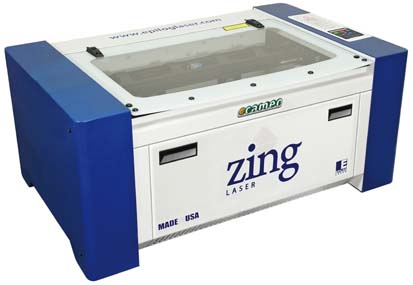 At the TV TecStyle Visions in Stuttgart, Cameo Laser, a trademark of the Franz Hagemann GmbH & Co. KG, will present two different systems that open up new possibilities for textile finishing.

With the cameo Zing 6030 (image) and the E 6045 powered by Epilog, it is possible to realise different marking techniques on different fabrics, such as velvet, jeans, cotton, fleece, leather or softshell and achieve a Wow-effect. Besides these, cameo will show at the stand C56 in hall 4 also market news like a new material called Laserflex that makes applying flexible lettering on textiles easier and more accurate. Patterns and letterings that have to be applied with Laserflex, a joint development of cameo and IVM Sign Tex GmbH, to a textile, can also be processed as bitmaps – simply without need to vectorise the graphics before.

In a special show Cameo will present how to personalise textiles with rhinestones in a snap by the mean of the LaserDraw 8.0 software.

Everyone who buys a cameo device at the trade show TV TecStyle Visions in Stuttgart receives additionally for free an Apple iPad 2 with application samples. The tablet computers features pre-installed cameo laser application videos with hints and help for using the device. A further service: Every new owner can have his iPad personalised with a motif or a letting done with a Cameo Laser.