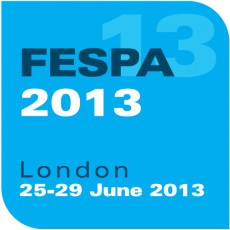 With a year to go until the event opens, Fespa 2013 in London – 25th to 29th June 2013 – is going from strength to strength and fast becoming next year’s unmissable exhibition for printers.

More than 310 exhibitors have already confirmed their bookings for Fespa 2013, nearly doubling the exhibitor numbers in comparison to the run up to Munich in 2010. Many exhibitors also plan to expand their presence compared with previous shows, adding more exhibition space to showcase their products.

The same exhibitors who attended Munich in 2010 have expanded their space in London by 10%. As a result, FESPA 2013 will be the biggest FESPA show ever, with two more halls added to the original floor plan.

The event – which embraces screen and textile printing as well as digital wide format – will take place at the state-of-the-art ExCeL London exhibition centre in the City’s vibrant Docklands area. ExCeL’s halls will play host to the richest showcase yet of printed graphics, signage, promotional print, industrial print and garment decoration.