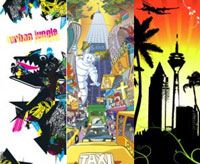 The winner of the designmaker competition presented a skilful reflection of the ‘Urban Jungle’ theme in his design. The competition called for design ideas that can be applied to the widest possible variety of advertising media.

The designmaker award was presented in Düsseldorf by viscom in cooperation with Karl Gröner GmbH and the SEW-Akademie. It was a successful and convincing premiere with many creatives who submitted their design ideas.

Marc Prien, graphic designer and owner of empegra secured first place with his complex and extraordinary design idea. In the jury’s decision, Bernd Gröner, Managing Director of Karl Gröner GmbH, described the winner as: “Edgy, stylish and reduced. Shapes, colours and font develop a language of their own in this design”.

It was the flexible applicability of the design to different advertising media that was convincing here. “The created brand can easily and elegantly be applied, adapted and placed, independently of all aspects, without appearing random or trivial,” added Gröner. The motif designed by Prien was presented on a variety of advertising media during the presentation of the award, for example, a t-shirt, a light box, a toilet pan and, a fully wrapped MINI.

Arno Ludwig, freelance designer and owner of Air Atelier, was only just edged by the winner coming in a very close runner-up. He merged various different comic elements into a very detailed design.

“The colouring and illustration blend in a wealth of detail that invites the observer on an extensive foray through his imagery. The spectrum of the design is marked by cheeky visual quotes accompanied by a fair portion of wit,” commented Gröner at the awards ceremony.

This design also achieved the optimal effect on the different advertising media. The jury was particularly impressed by the design’s realization as a direct print with colour gradients on textiles and the implementation of glaring, cheerful colours as an illuminated display. The car wrapping was the only requirement that was a little difficult to realize due to the complexity of the design.

Third place in designmaker 2011 went to Karsten Vogt from AQASIO Folienverklebung. His motif consisted of skyscrapers and plants as silhouette drawings. The jury was particularly impressed by the successful blend of hard contrasts and soft visualized light in the design. In addition, it was possible to apply the design to all of the required advertising media; the 3D-aspect was well taken into consideration and especially well-conceived in the vehicle design.

The best design received a prize of 3,000 euros; the runner-up received 2,000 euros and the design in third place was awarded a prize of 1,000 euros. In addition, the winner also received software and manuals from the award’s sponsor creativ collection Verlag GmbH.