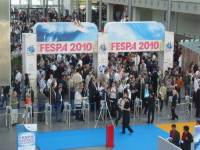 More than 21.000 individual visitors from 130 countries flocked to Fespa 2010 in Munich, looking for innovative solutions and applications to help their wide-format businesses ride the wave to business success.

More than half of all visitors extended their stay beyond one day, taking total attendance to 32.504 visits. A record 68% of visitors to Fespa 2010 highlighted digital technology as a priority interest area, compared with less than 52% three years ago at Fespa 2007 in Berlin.

Top five
Printers from Germany, Italy, Austria and Switzerland were consistently among the top five visitor groups, comprising 12.352 visitors in total, an increase on their collective attendance at Fespa in Berlin. Elsewhere in Europe, the UK, France, Spain, Poland and Czech Republic also delivered significant visitor groups. 40% of total attendance came from Germany, a further 50% from the rest of Europe, 7.5% from Asia, and the balance from the Americas and Africa.

Next Fespa Fabric
Plans for Fespa Digital 2011, which will take place in Hamburg, Germany from 24 – 27 May 2011, are well underway. The organisation has extended this event from three to four days in response to feedback from key exhibitors.

From 24-26 May 2011, Fespa will also bring its Fespa Fabric ‘event-within-an-event’ to Hamburg, delivering a dedicated three-day event for European garment printers and decorators, featuring a Fabric Live! fashion show and other satellite initiatives of the type seen at Fespa Fabric 2010 in Munich.

The show will occupy 5000 m² in Hall B1, which is adjacent to Fespa Digital 2011, linked to the main show by a walkway between the two areas of the exhibition centre. According to the organisation Fespa Fabric 2011 will be the only pan-European exhibition addressing this audience in 2011. It will also stage its third Fespa Digital Textile Conference alongside the 2011 event.