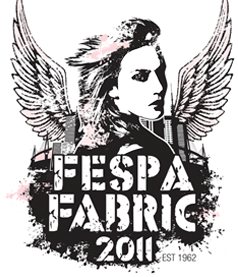 Fespa Digital 2011 and Fespa Fabric 2011 took place side by side at the Hamburg Messe from 24-27 May and 24-26 May.attracted a record-breaking audience of over 13,000 individual visitors, a 34% increase over the last Fespa Digital event, which took place in 2009 in Amsterdam.

Of the 13,000 visitors, around 5,300 attended the show on more than one day, resulting in a total of 18,300 visits. On this basis, more than 40% of all visitors to Fespa Digital 2011 and Fespa Fabric 2011 devoted more than a day to their visit (2009: 32%). This is a strong indicator of the extensive scope of the two 2011 events, and the commitment of visiting printers to take in the full spectrum of technology innovations and educational content.

The attendance of Fespa Fabric underperformed compared to Fespa Digital with only 2,500 visitors. The ‘event within an event’ was located in Hall B1, apart from Fespa Digital. Visitors looking to update themselves on the latest technology, substrate and ink development in garment printing and decoration had to take a stroll to get to Fespa Fabric.