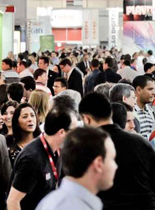 The joined exhibition of Serigrafia, Sign and FutureTextil, achieved its broadest ever reach.

Taking place at the Expo Center Norte Exhibition Centre in Sao Paulo, Brazil from 20th to 23rd July, the exhibition attracted 450 exhibitors and over 45,000 visitors from Brazil, Argentina, Chile, Colombia and a number of Central American countries.  This represents an increase in visitor numbers of over 11% from the exhibition in 2010, giving an indication of the ongoing growth and success of the event.

The range of products on show was a testament to the broad appeal of the exhibition. On the Océ stand for instance, solutions for applications including POS, banners, decorations, as well as solutions aimed at the corporate, architectural, engineering and construction sectors were on show. Serigrafia, SIGN and FutureTextil 2012
Many exhibitors commented on the success of the event at generating new sales leads and cementing relationships with existing customers, with some already having committed to exhibit at the event in 2012.

Serigrafia, SIGN and FutureTextil 2012 will take place from 18th to 21st July 2012 again at the Expo Center Norte Exhibition Centre in São Paulo.