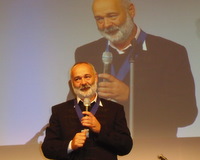 Gyorgy Kovacs is inaugurated as Fespa President at Fespa 2010, with an official ceremony at the Gala Dinner on Friday 25 June at Munich’s Nockherberg. Kovacs takes over from outgoing President Anders Nilsson, who has held the position since Fespa 2007 in Berlin. Native Hungarian Gyorgy Kovacs acceded to the Fespa board in 1996, following the foundation of the Hungarian Screen Printers’ Association in 1992, of which he is President. He has been active on the Fespa Projects Committee, which has been instrumental in developing, funding and managing major initiatives such as Fespa Certified PDF, e-learning and the Fespa technical helpline. Kovacs originally trained as a teacher, and worked in the Hungarian public school system until 1991, while also undertaking freelance graphic design and screen printing work.

Fespa Americas
During Kovacs’ Presidency, Fespa will host Fespa Digital events in Hamburg (2011) and Barcelona (2012), and take its flagship event, the ‘Big One’, to London (2013).

Singapore will be the host country for Fespa Asia 2011, and the first Fespa Americas show will take place in Florida (USA), in the same year, reinforcing Fespa’s presence in the Americas.