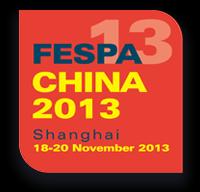 Fespa is expanding its event portfolio in Asia, with the launch of Fespa China in 2013. The first Fespa China event will take place from 18-20 November 2013, at the Shanghai World Expo Exhibition and Convention Center.

This CSGIA exhibition has been successfully staged annually since 1983, alternating between venues in Guangzhou and Shanghai, and attracting an increasing number of foreign exhibitors. The last CSGIA show in November 2011 covered a hall area of 25,000 m2, with more than 400 exhibitors and total attendance of over 18,000.

Fespa and CSGIA will also benefit from consultative support from ASGA (Asia Screen Printing and Graphic Imaging Association), the federation of Asian printing trade associations. ASGA will host its annual meeting at Fespa China 2013, bringing a delegation of senior executives from the pan-Asian region.