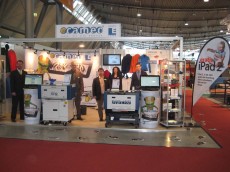 ‘Discover new prospects’ is the slogan for Viscom 2012, which will take place in Frankfurt, Germany, from October 25 to 27. Franz Hagemann GmbH & Co. KG will present the high-performance systems of their ‘cameo’ trademark during the international trade show.

The company will exhibit at Stand G 60 in Hall 3 the cameo Elite devices 9060 and 6045 as well as the cameo zing 6030. Visitors will enjoy the opportunity to test at the stand the multiple possibilities of this technology – especially for Further products and accessories for the textile industry will be shown in operation: cameo embroidery frames, which allow fixing the fabrics in an easy way with laser, as well as Laserflex for flex letterings on textiles.

Honours from the USA

Further news on Franz Hagemann GmbH & Co. KG: the company has been honoured for the sixth time in succession as the most successful Western European Distributor of the US company Epilog. Once again, the company from Lower Saxony received the ‘Exceptional Sales Performance Award’ for constantly high sales figures. Franz Hagemann GmbH & Co. KG has been selling Epilog laser devices under the brand name cameo since 2006.