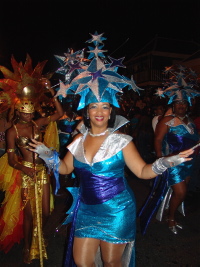 Normally, from the middle of December to the beginning of February, we print T-shirts intended for the carnival. It is always a very hectic period because there are so many events and everybody needs it at the same time and they deliver the artwork just on time. History of the carnival. After the mid-20th century, a mix from different influences – for example the Dutch colonists and the Asiatic immigrants with their characteristic way of celebrating carnival, the people from the Eastern Caribbean Islands with their street parties and parades and the Creole middle class with their private balls – started to merge together and melt down into one huge national cultural expression on the island that features people from almost fifty different nationalities. With the inclusion of Tumba (the island’s typical music form), Carnival without a doubt became the biggest and most important cultural manifestation on this beautiful island.

Curaçao Carnival
Curaçao Carnival is a celebration in a class of its own. It more or less takes full possession of the whole community through competitions (Tumba music and Calypso festivals), beauty pageants, private and public parties and street parades during the first weeks of the year, climaxing on the weekend and Tuesday preceding Ash Wednesday (the first day of Lent). In 2010 Curaçao celebrates the 40th anniversary of its carnival.

After the official opening of the carnival season, the carnival groups get together and dance through the streets. They dance and jump behind music bands and wear T-shirts with the name of their group. In the following weeks they organise ‘jump-ups’ (open air parties) and ‘jump-ins’ (indoor parties). They try to sell those T-shirts for their participation in the ‘Gran Marcha’ (the big parade).

Also, a lot of companies use this event to promote their company name. They organise parties with a lot of food and drinks where your T-shirt is the proof of purchase of your entrance. All this is good for our business of course. But you will not recognise the T-shirts anymore at the party, because the people are so creative over here. With one T-shirt they make a whole outfit. For example: a tank-top with a skirt, a wristband and even a hair ribbon. And they put all kinds of extra decorations on the shirts such as buttons and glitters. It really looks amazing, but actually you have to see it with your own eyes.

Printing for Carnival
So normally, from the middle of December to the beginning of February, we generally print T-shirts intended for the carnival, but, because of the 40th anniversary, this time we have our first assignment for a fun walk in October. It is always a very hectic period because there are so many events and everybody needs it at the same time and they deliver the artwork just on time.

Because of the small budget of most carnival groups, they opt for printing on white basic T-shirts or bandanas. We have to be really sharp with our proposals to get the orders, because there is a lot of competition and if you get one order, usually a lot will follow, because it is a very small Island. So mouth-to-mouth advertising spreads really quickly. Most T-shirts that we use in this time are from the brands’ Best Ts or Superior Ts, or whatever they have in stock locally at the moment for a good price. They don’t really care about the quality of the T-shirt, which I can understand because most people are going to cut and decorate it anyway once they have bought it. The print on the textile varies from group names to logos or sponsor names and it’s commonly very colourful. We also do printing on textile with heat transfers, but we only use that method if it’s a really small amount. So in the carnival period this method won’t be used very often. Sometimes, you have a small group who want to stand in the audience at the parade with their own designed T-shirt with a catch-phrase or something else and then it’s a good alternative for screenprinting.

Embroidery for Carnival
The bigger companies who use the carnival to promote their company by organising parties opt for embroidery on caps or polo shirts or prints on better quality T-shirts (Hanes or Fruit of the Loom, for example). We only have to order those brands from America, which causes a longer delivery time (approximately 14 days).

Artwork
We get the artwork by e-mail in eps or pdf format and it’s often delivered by professional graphic-design agencies (there are a lot of them on the Island) so it is easy for us to make the films or to digitise it for the embroidery machine. Once in a while you get a really bad or low-resolution picture, but our graphic designer here at the company knows how to deal with it.

We actually have almost everything under one roof, which makes us truly unique in Curaçao and interesting for customers if they need to combine embroidery and printing on the same product.

About the author:
Pierre Wouters is the owner of the embroidery company Stitch One Ltd. He is also Manager of Grafitex Ltd., a screenprinting company, and DP+D, a digital print and design company. Pierre has previously attended the Grafische School in Utrecht, Holland and has more than 25 years’ experience in the screenprinting and embroidery industries. Pierre is an all-round manager, as he is involved in the design, production, administration, finance, marketing and logistics areas of all these companies. You can contact him at info@stitchone.com