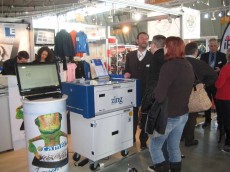 At the cameo stand the cameo Laser in cooperation with IVM Signtex presented an innovation on the market: Laserflex. The material makes it easier to implement flex lettering, which can now also be performed with the utmost precision: “As opposed to applying a motif by means of foil cutters, Laserflex does not require peeling off, which means that even the most delicate emblems can be manufactured within a few steps,” explained Michael Ebel of cameo Laser.

Rhinestone processing in a blink of an eye

Also the special “rhinestone area” demonstration, performed by the creative coordinator Christiane Uhde, showed that the laser simplifies the work flow during textile processing. Here, embellishments with glittering rhinestones are implemented effortlessly by means of a computer and a laser. From the idea to the final product in a few minutes.

With just one click with LaserDraw 8.0 software the graphic pattern is converted into a point pattern model which allows distances between the rhinestones, their sizes and colours to be chosen. In case of multicoloured motifs, one template is created for each colour, which is then cut out of a plastic panel by means of a laser.

After the template has been prepared, the remaining procedure is simple: “The rhinestones are swept across the template and due to their shape, and by the principle of gravity they fall into the cut-out slots almost by themselves. Afterwards, a transfer film is placed over it,” explained Christiane Uhde. When the film is peeled off, the crystals adhere to it and are applied to the fabric by means of a transfer press in a matter of seconds in the next step. If the motif features multiple colours, this step is repeated for every colour.

Franz Hagemann did not only provide demonstrations, but also special promotions to increase their reputation: each cameo device buyer received a free Apple iPad 2. The tablet computer contained application videos by cameo Laser, suggestions, and support for the users of their systems. Additional benefit: each new owner could have their iPad custom designed at the cameo stand with a motif, or lettering of their choice.