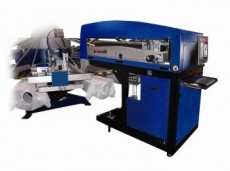 The aim at Kornit Digital is to build a bridge from high-quality screenprinting towards the most advanced Direct-To-Garment technology. Kornit Digital and Walz, manufacturer of Schenk screenprinting carousels, are teaming up for an Open House event in the European subsidiary of Kornit in Dusseldorf-Ratingen, Germany.

Kornit Digital Europe is holding an Open House on March 1st and 2nd in Ratingen, Germany. The event is centred on their unique integrated solution combining a Schenk screenprinting carousel and Kornit’s Paradigm, a digital printing machine developed specifically for the integration with conventional screenprinting technology. The primary target audience for the event is the screenprinting community where digital printing is far from being a disruptive technology but adds tremendous value to their existing screen-based production capabilities.

Kornit also presents almost their complete portfolio of DTG printers, with live demos and a chance to learn more about the Kornit Breeze, Thunder and Avalanche DCpro.