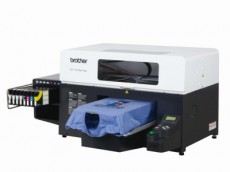 Brother had six exhibitions in February to introduce the new GT-3 Series in the markets in Europe.

One stand-out feature of the new GT-3 Series is simultaneous one pass printing of white ink and CMYK color for faster productivity. Another one is their ability to print up to 1200 dpi for clear crisp images and photographs. And they have a compact size.

The first delivery to end users is planned for April/May 2012.